In March 2020, right in time for spring break, American Studies debuts their first single, “Panama City Blues.” A jukebox juxtaposition, “Panama City Blues” takes Larry and the Loafers 1960 rock-n-roll obscurity of the same name and turns it into a modern, vibrant, and psychedelic club anthem -- engaging a new set of teenagers and college students in much the same way it did in the century prior. In other words, it’s Beach Blanket Bingo gone Beach Blanket Banger! And there will be more to come when American Studies drops its first LP later this year.

Like “Panama City Blues,” American Studies, the duo of Bryant Saxon and Ryan “Inkline” Howell, works within a collision of styles and sensibilities – both rooted in a love of obscure records. Encouraged by his father, Saxon (who owns and operates the Earth Libraries label), was introduced to the world of record collecting in the mid-90s – particularly the sounds of 1950-60s rock-n-roll and R&B. Howell is a noted musician, producer, and emcee, known primarily for his solo work as Inkline, and as one half of punk-forged hip hop mavericks, Nerves Baddington. Though Earth Libraries is committed to a broad range of new artists (new albums by Human Beat, Burnin’ Moon, Seriously, Bitter Calm, and the forthcoming Wray album are all worth your attention), the idea of making new songs by sampling the original recordings that Saxon and his father had uncovered, collected, and preserved, became a passion project of its own.

To get the ball rolling, Saxon sent a set of recordings to Howell. The collaboration quickly produced interesting results thanks to the contrast of vintage guitar tones and vocal styles with beats influenced by world music and modern R&B – all while adding complex layers of psychedelic effects. Knowing they had sculpted something fresh and unique, American Studies officially came into being. To bring the source recordings into the digital realm, Saxon and his father had long ago began the work of carefully recording the best known copies of these records and then meticulously removing pops, clicks, and surface noise – elevating the audio to a quality worthy of the original master recordings.

The remastered tracks were then shared via CD-Rs to other record collectors but rarely surfaced to official releases, except for an occasional appearance on bootleg European compilations. To make sure that the releases were authorized, and the stories of recordings could be fully told, Saxon began the arduous process of tracking down the original artists. In time, he began to forge relationships with these artists, who now range in age from 70 to 90 years old. The ultimate payoff from that hard work will be these lost classics – and their modern offspring – finding the audience they so richly deserve. History lessons rarely slap like this!

Listen on Spotify/Apple Music and more: http://smarturl.it/AmericanStudies
Posted by Sylvia at 6:50 AM No comments:

34th Annual BRC Record show will be August 17, 18 and 19th at the Gardendale Civic Center.  Dealers from all over will have records in all formats, CDs and memorabilia.  See flyer for more details. 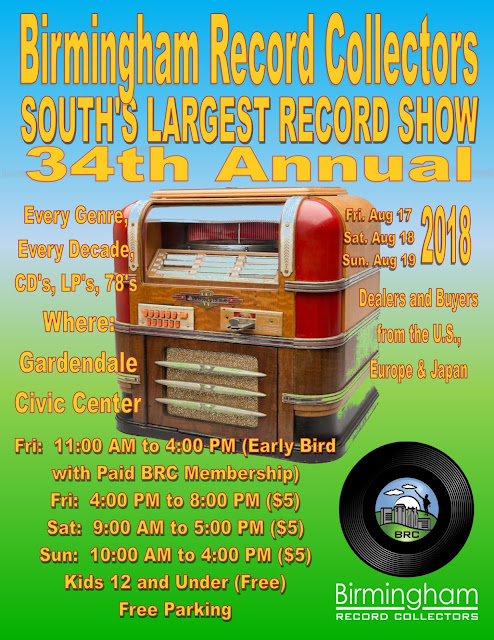 33rd Annual BRC Record show will be August 18, 19 and 20th at the Gardendale Civic Center.  Dealers from all over will have records in all formats, CDs and memorabilia.  See flyer for more details. 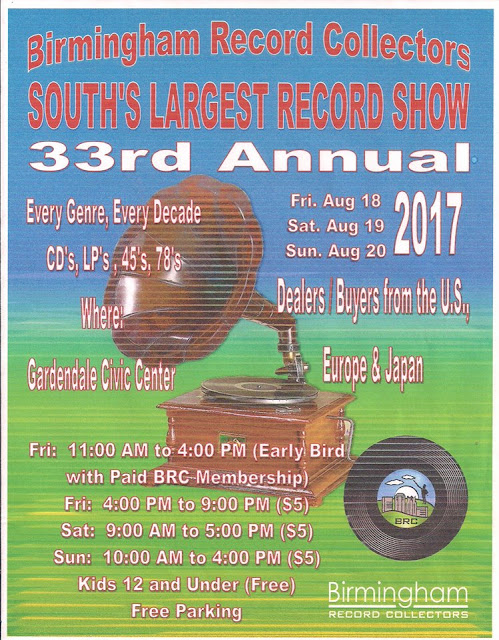 Posted by Sylvia at 8:05 AM No comments:

On Friday, the Early Bird session starts at 1 pm with an admission charge of $10. The $3 general admission hours on Friday are 4-9 pm and 9 am – 5 pm on Saturday.

Will this be your first visit to the show? If you have any questions or need advice, sent us an email at alarecordca@gmail.com and we’ll be glad to help. 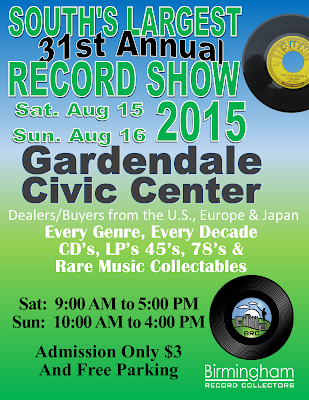 The 31st Annual Birmingham Record Collectors Record show will be Saturday August 15 and Sunday August 16th 2015!  This don't miss event will be at the Gardendale Civic Center. 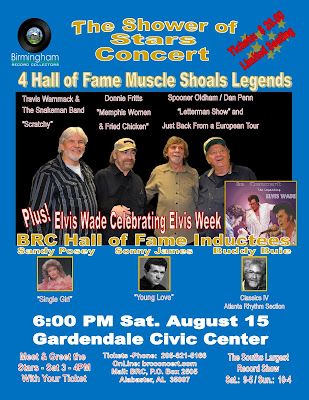 And, stick around after the show on Saturday for a concert by Muscle Shoals legends Travis Wammack, Donnie Fritts, Spooner Oldham and Dan Penn.   Tickets are $20 and can be purchased by calling 205-821-5166

The Civic Center is located at 857 Main Street, Gardendale AL 35071 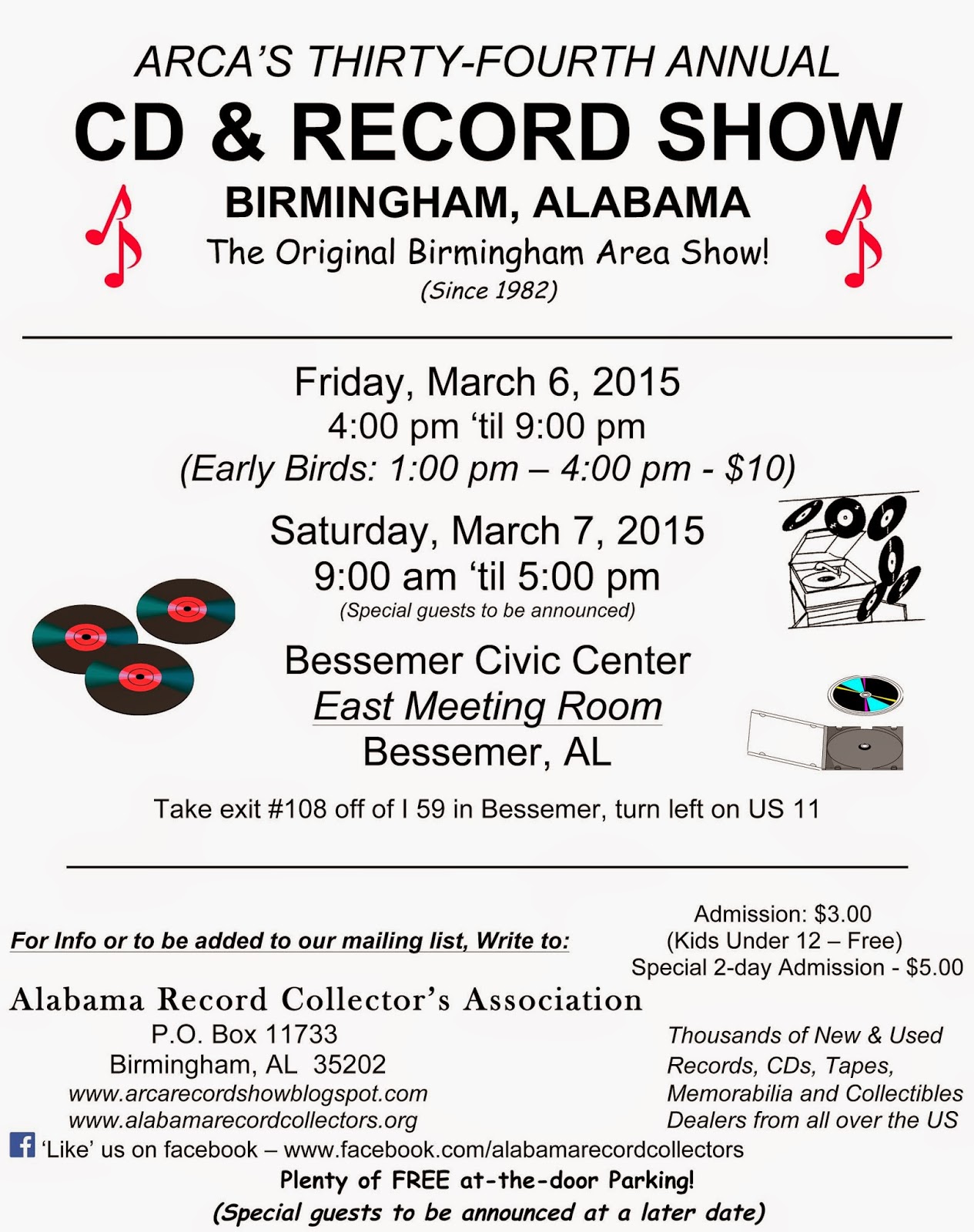 Posted by Sylvia at 8:34 AM No comments:

Travis Wammack and the Snakeman Band December 6 in Gardendale

Thanks to the great folks at Birmingham Record Collectors Travis Wammack and the Snakeman Band will be at the Gardendale Civic Center on Saturday December 6th. Gardendale is just north of Birmingham.  Tickets are going fast, to get yours contact Don Campbell at 205-837-0596. 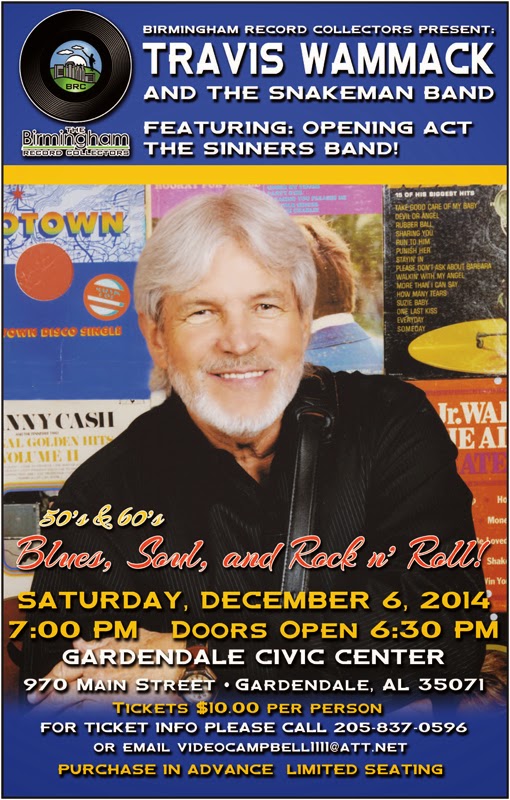