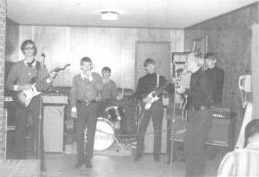 Members of The Shadows, a 1960s garage band, will be reuniting after 45 years to play a sock hop in Northport Alabama.  The Shadows used to play after Tuscaloosa County High home football games and the reunion show is sponsored by the Tuscaloosa County High Alumni Association.   The band will include Jack Bigham, Michael Thornton, Stanley Fowler, Donnie Walker, Frank Cannon and Roger Young.

Garage Hangover profile for The Shadows
http://www.garagehangover.com/?q=Shadows
Posted by Sylvia at 1:19 PM No comments:

Sandy Records was an independent rock and roll record label established in Mobile, Alabama by Paul DuBose and Johnny Bozeman in early 1957. It launched the careers of many artists such as Ray Sawyer, lead vocalist of Dr. Hook and the Medicine Show. "Tell Him No" by Travis and Bob became the label's first hit record in 1959.   Many of the songs released on Sandy and its subsidiary, Orange, have become sought after by collectors and reissued on anthologies. Here are a couple of my favorites for your listening pleasure.

Rockin' In The Graveyard by Jackie Morningstar AKA Jackie Morrell, released in 1959.