The Shadows are back, thanks to Dennis Hambright who asked the 1960s Northport garage band to get back together and play at the TCHS Alumni sock hop in 2011.  Over 750 people attended and the band is back playing this year's sock hop as well as other events (you can check their website http://www.theshadowsband.com/ for updates).

Here is a video of their 2011 performance: 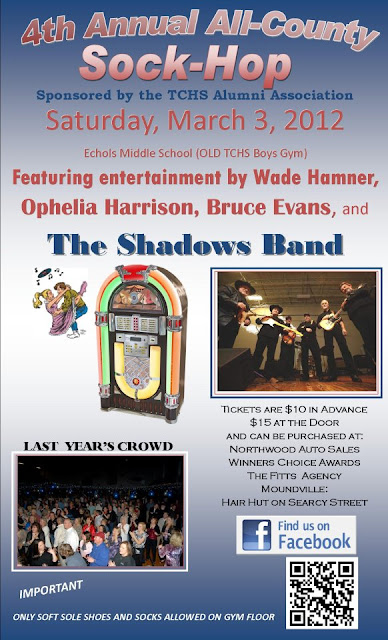 For more information on the Shadows see: http://alabamamusicoffice.com/artists-a-z/s/2710-shadows-the

Bassmen and Ramblers Feburary 18 in Birmingham

Two 1960's Birmingham garage bands, The Bassmen and The Ramblers will play a benefit show on February 18, 2012 at Park Lane located at 2117 Cahaba Road. Mountain Brook, AL 35223. Doors open at 6:30 and The Bassmen will play 7:00-8:00 and again from 9:15 to 10:00 and the Ramblers will play from 8:15 - 9:00.  Tickets are $60 per person and includes food. Proceeds will go to Children's Harbor in the memory of Sperry Snow.  Snow was a high school classmate of the Bassmen and board member for Children's Harbor who passed away last year.    To attend: RSVP to Ellen.philips@childrensharbor.com. Note that seating is limited.

In 1962; five eighth graders from Birmingham. Alabama, Tommy Allison (drummer) Mike Easter (guitar) Rob Hackney (clarinet) Bert McTyier (sax) and Tommy DeBuiys (piano) came together to form "the Churchkeys". Soon, McTier and Debuys left, Hackney picked up the giutar and they were joined by Charles Feldman (singer) and Chuck Butterworth (bass). The band changed its name to The Bassmen in 1964 and began playing at sock hops, cotillions and other local venues. More changes came as Butterworth left to play with another local group and Easter picked up the bass. In addition, the band was joined by Vaughn Rives (rhythm guitar) and Steve Gilmer (keyboards). By this time it was 1965 and The Bassmen were in demand for college fraternity parties and other regional engagements. As graduation neared, the career paths of each member would take them in different directions and The Bassmen went their separate ways in June of 1970. It was not until 16 years later on the occasion of their 20th high school reunion that The Bassmen were reunited to play. After that, it didn't take long for the group to regain its momentum and popularity and today The Bassmen are still going strong, playing the same great music that brought them together back in 1962.

The Ramblers will also be playing at the 50th year reunion of the Ramsay High School class of 1962 in May 2012.

On August 18, 2012 both The Bassmen and The Ramblers will have their 4th annual show at Workplay in Birmingham.